In 2016, 81% of Slovak employees had lunch on a daily basis. It was higher than the European average (71%). This figure remained high and stable over the 5 years.

In 2016, Slovak employees usually mainly ate a dish/a complete meal (52%) or home-made food (39%). These figures have remained rather constant over the 5 years the FOOD barometers were launched, with a slight rise in the dish/complete meals consumption.

When choosing a restaurant, in 2016, Slovak workers considered important or very important practical criteria linked to working life constraints such as a quick service (88%) and the location of the restaurant, which had to be close to their workplace (79%). The environment also had to be pleasant (83%), the food served had to be affordable/cheap (72%) and the restaurant had to use locally produced and/or seasonal food (61%). Slovak employees also gave importance to tap water, which had to be served free of charge (63%).

A very high share of Slovak employees (79%) considered important or very important the nutritional quality of the meals served when choosing a place to have lunch at. It is a bit higher than the European average, which was of 77% in 2016. This figure has been rather high and stable over the 5 years.

In 2016, the balance of the dish affected the decision-making of 43% of Slovak employees, which was the second most chosen criterion, after what they wanted at the present time (76%). Slovak employees also decided according to the price (41%) and to the “dish of the day”/ specialty of the house (37%).

It was the first time this share was that high, after several years of stagnation at around 16-19%, therefore showing the growing attention paid by Slovak workers to balanced nutrition.

In 2016, 52% of Slovak restaurants noticed an increased demand for balanced/healthy meals. This figure has been overall increasing over the 5 years, reflecting the growing demand for healthy food offer that was noticed on the employees’ side. 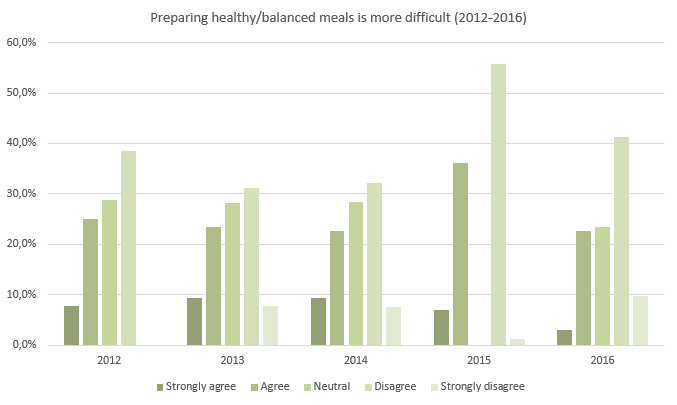 The prejudices about preparing healthy meals have increased among Slovak restaurants, especially the idea that it takes more time to cook healthy meals and that they do not taste as good as less healthy options. However, the share of restaurants disagreeing with the statement that cooking healthy meals is more expensive has globally increased over the 5 years.

The connection between Offer and Demand for a balanced food offer is rather good in Slovakia. Slovak employees pay a growing attention to the balance of their meals and it is reflected to a good extent in the perception of restaurants of their customers. Slovak restaurants have rather positive opinions about healthy cooking, even though they tend to have slightly more and more prejudices about balanced nutrition.