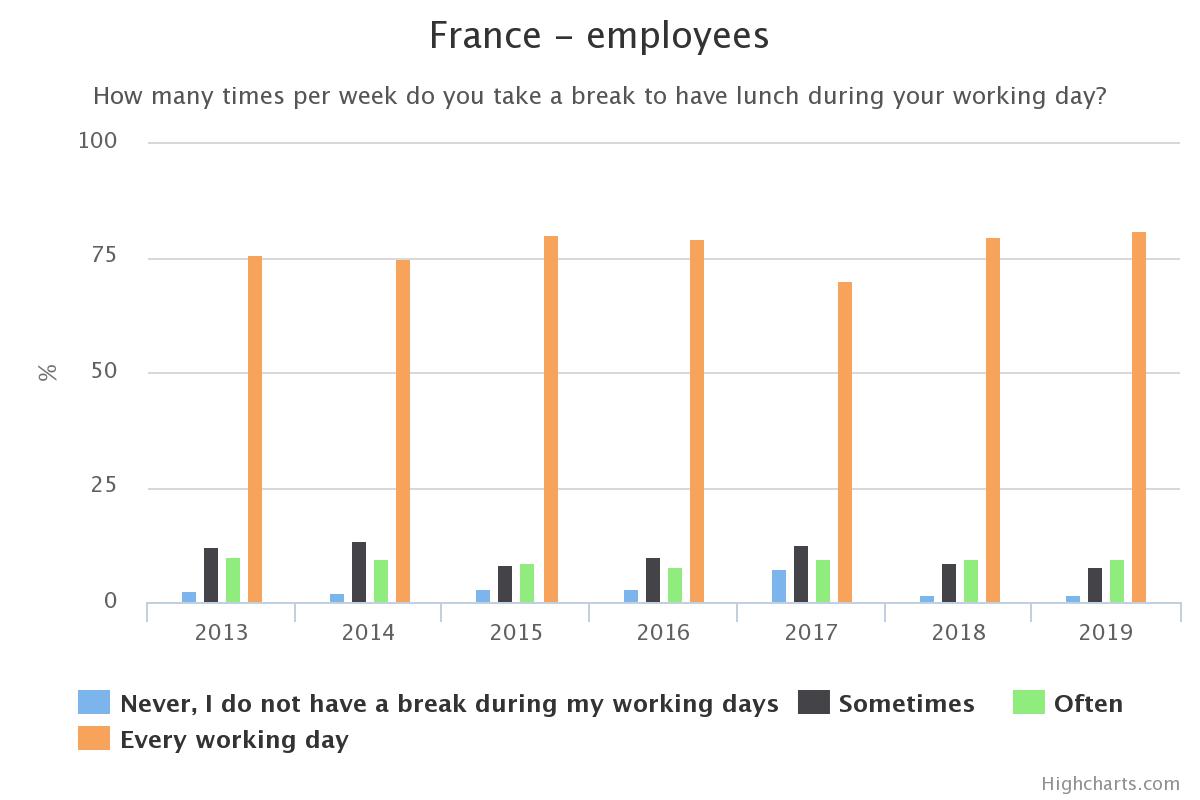 In 2016, 80% of French employees had lunch on a daily basis. It was above the European average, which was of 71%. This figure has remained quite constant over the 5 years. 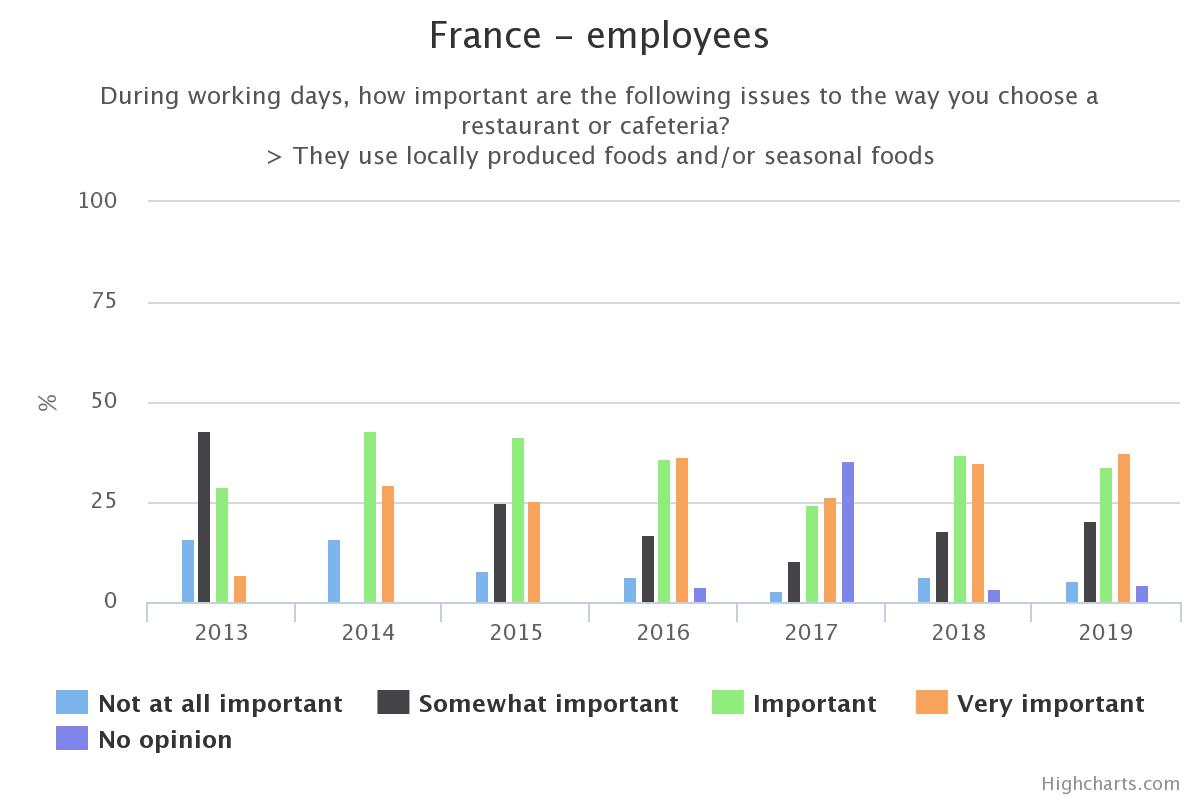 In 2016, French workers usually ate home-made food (48%). This figure has remained stable over the 5 years. We also notice a slight increase in the consumption of complete meals.

When choosing a restaurant, in 2016, French workers considered important or very important practical criteria linked to working life constraints such as a quick service (83%) and the location of the restaurant, which had to be close to their workplace (75%). Also, it was important/very important that tap water was served free of charge (79%) and that the restaurant served affordable/cheap food (77%). 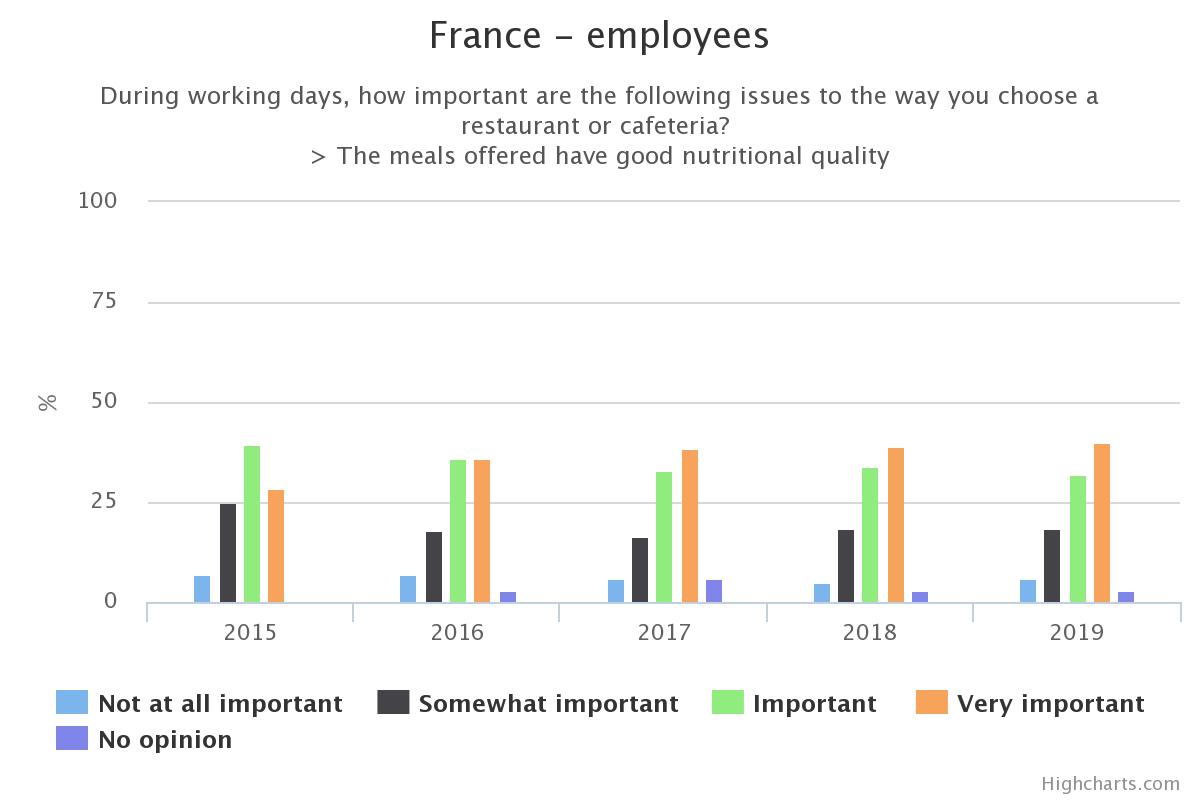 In 2016, 72% of French workers considered important or very important that the restaurant proposes meals of good nutritional quality, which shows that French employees give importance to eating healthy when choosing a restaurant to have lunch at. This figure was close to the European average in 2016, which was of 77%. Apart from a peak in 2014 and a drop in 2013, the share of French workers considering important of very important the nutritional quality of the meals offered when choosing a restaurant for lunch has remained quite constantly significant over the years, showing the attention paid to balanced eating among them. 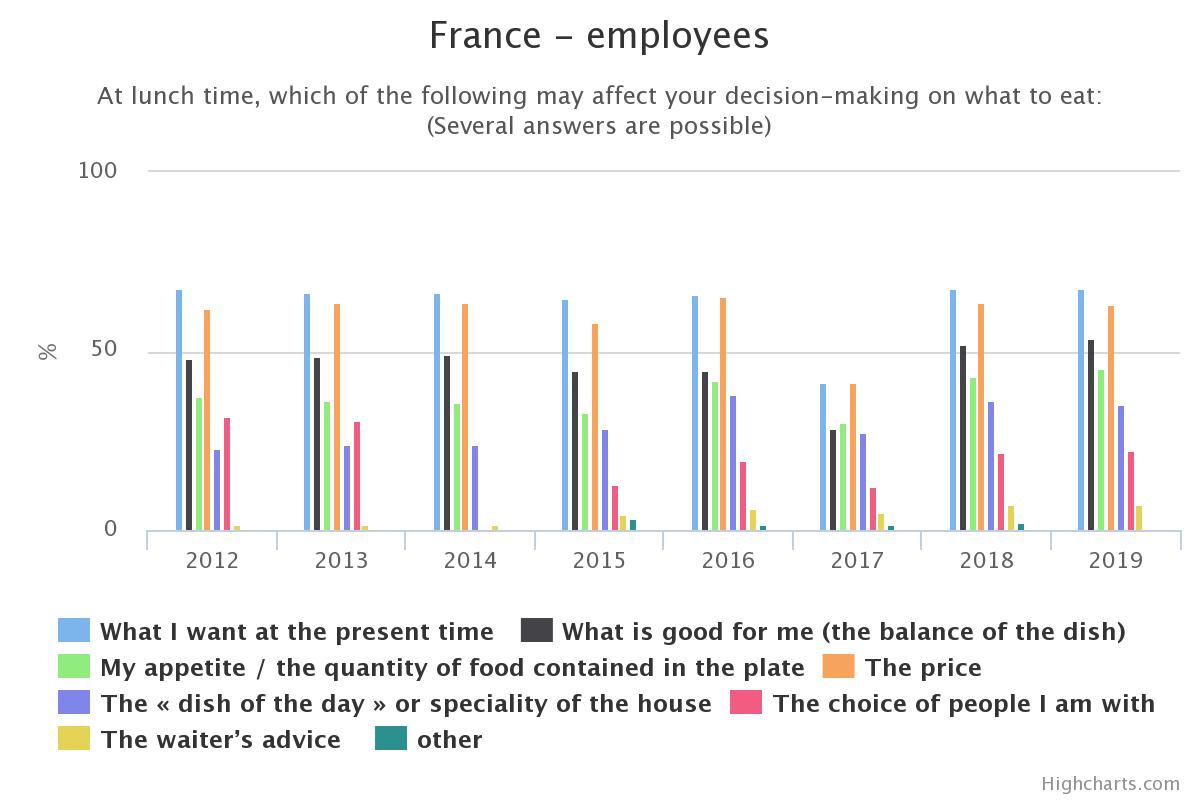 In 2016, close to half of French employees (45%) took into account the balance of the dish when choosing what to have at lunch, right after what they wanted at the present time (66%) and the price (65%).

Apart from a drop in 2015, the balance of the dish was therefore among the three main criteria that affected French workers’ decision-making on what to have at lunch and has remained close to 50% all over the 5 years. It shows that a very significant share of French employees give importance to the balanced of their dish when choosing what to have at lunch. 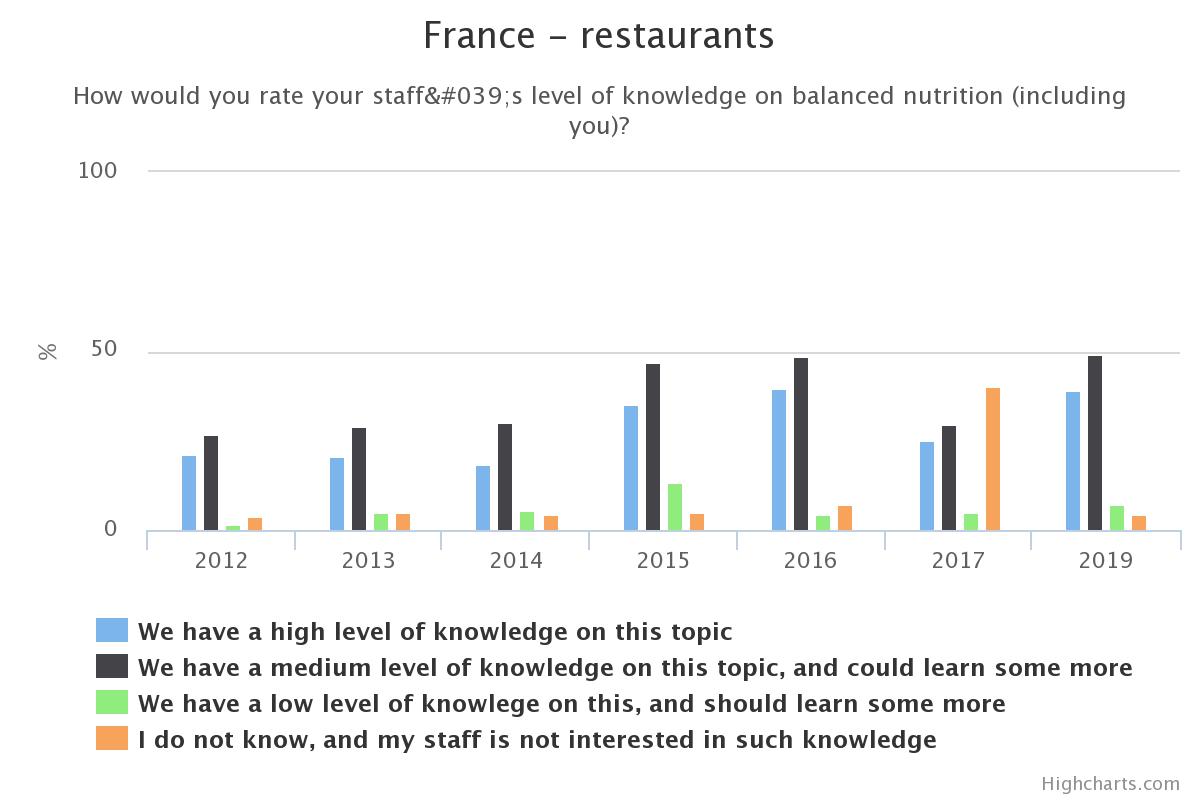 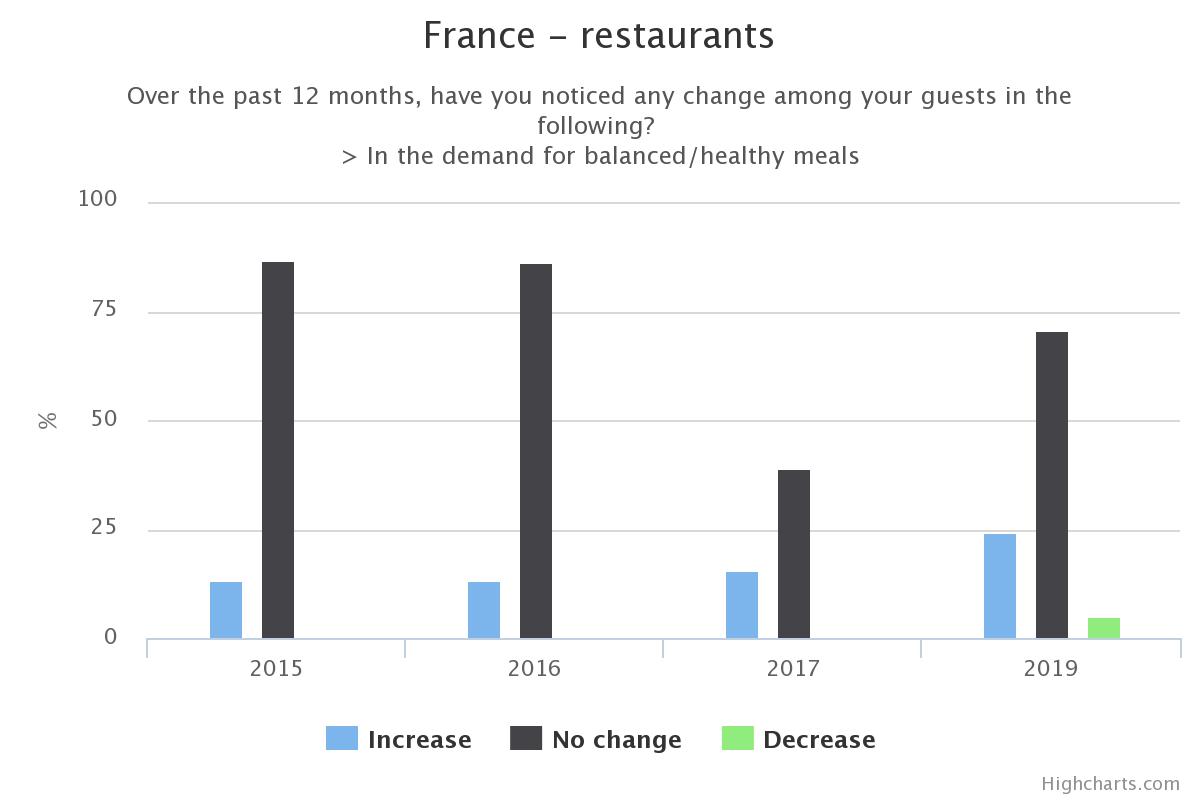 In 2016, only 13% of French restaurants declared noticing an increased demand for balanced/healthy meals. It was much lower than the European average (36%). This figure has been quite constant over the 5 years. 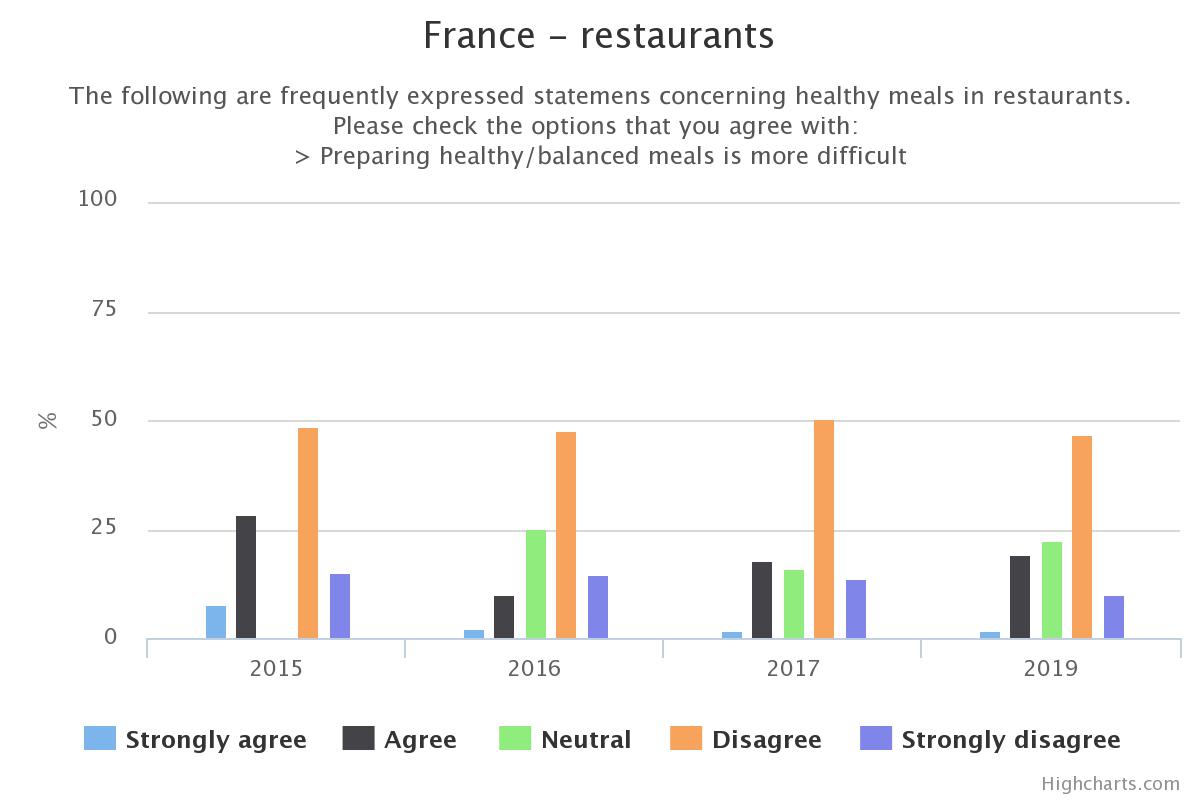 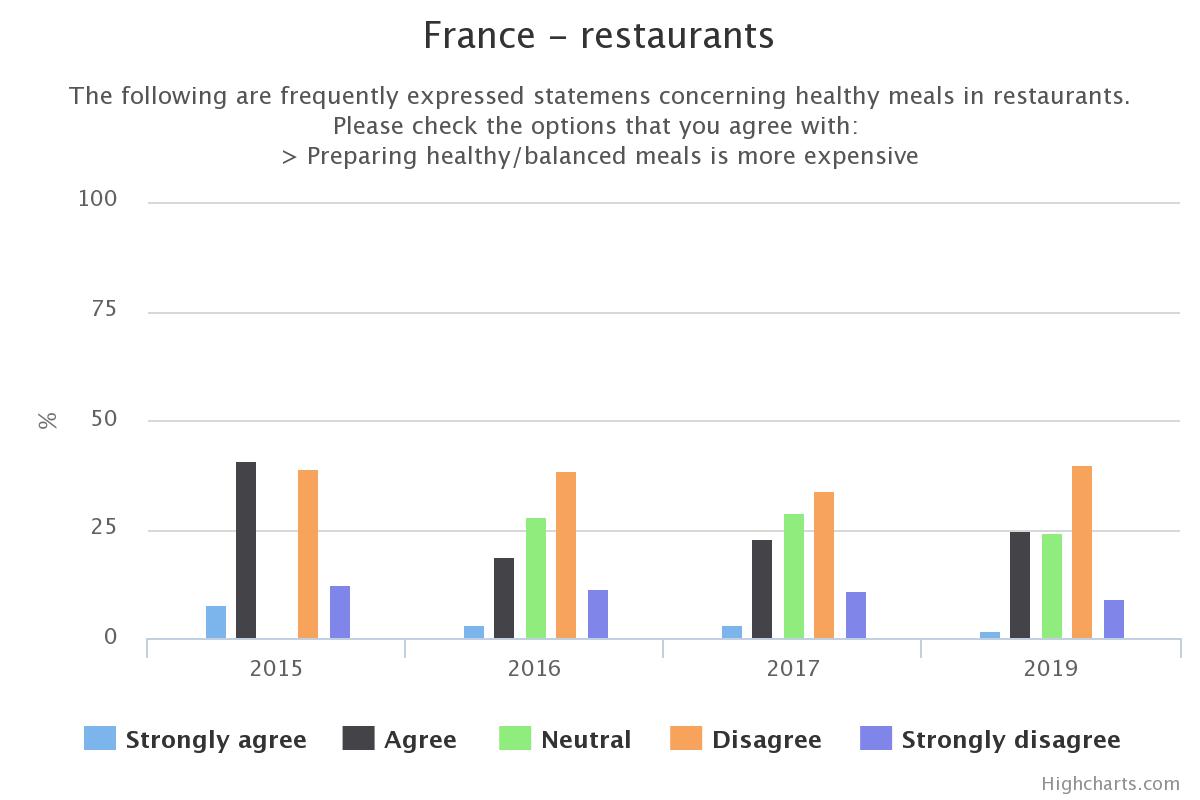 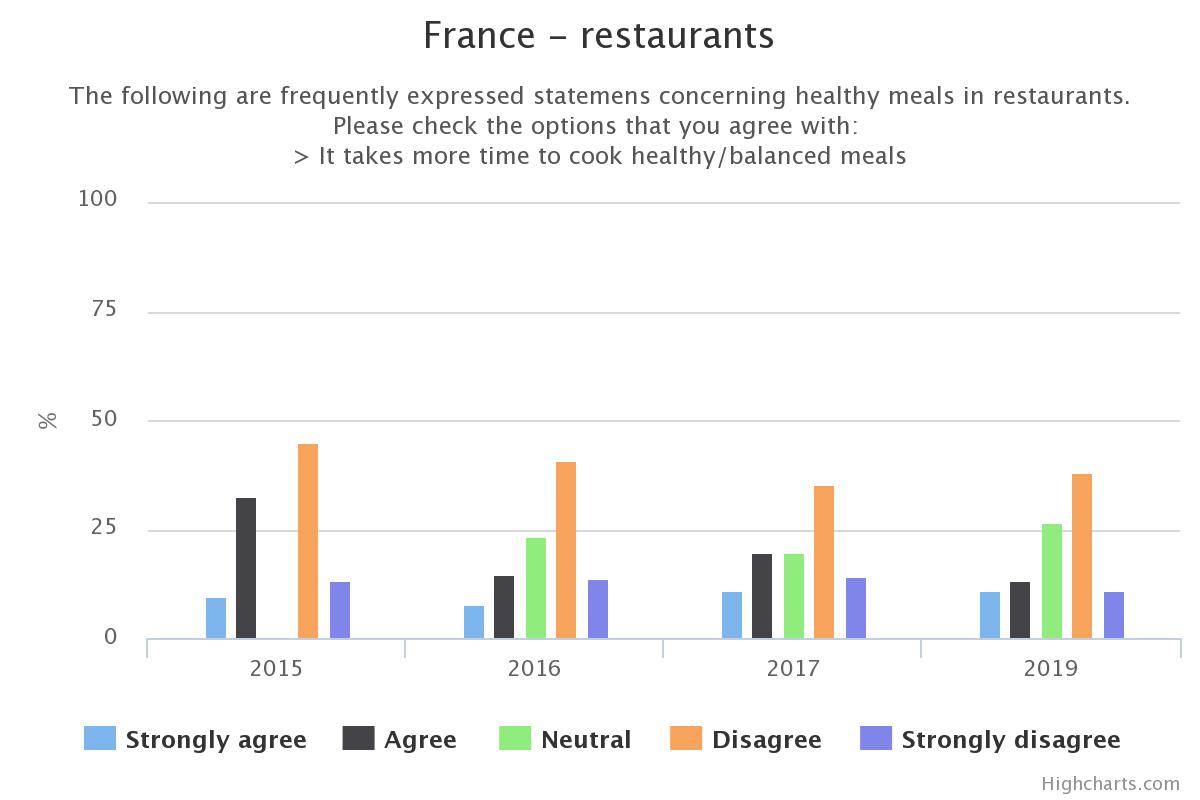 A significant share of French employees give importance to the balance of their dish but it is not reflected in the restaurants’ perception of their customers. On the other hand, a growing share of French restaurants owners declare that they have a good knowledge on balanced nutrition, or that they have a medium knowledge and could learn more, showing a growing interest for the topic. Plus, they do not have strong prejudices about cooking healthy meals.